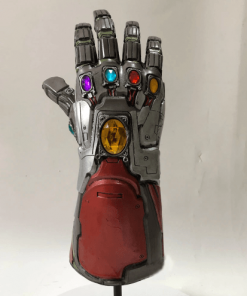 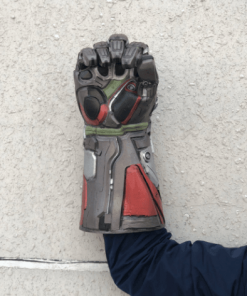 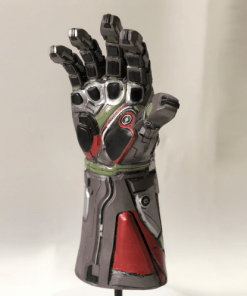 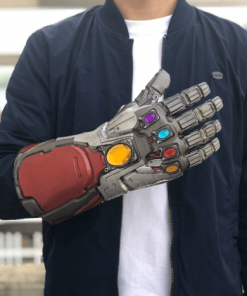 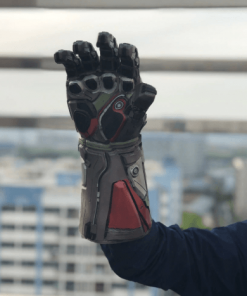 The gauntlet of the infinite Endgame that saved the universe from its end can now be yours! Feel the power of the six gems in your veins as you put on the gauntlet, which was able to make Thanos disappear with a snap of the fingers. If Thanos’s golden gauntlet was already a masterpiece, Tony Stark outdid himself with this work of art.

He got a glove to store the power of the six gems and it fits the size of the one he has. We saw the Hulk and Tony Stark with the gauntlet of the infinite endgame in the film, which are quite different hand sizes. If you’re wishing you could have the new Avengers Endgame toy, don’t wait any longer.

The final version of the gauntlet of infinity is now available to recreate all the wonderful scenes we saw with this new creation. Thanks to Tony Stark’s intelligence, the avengers were able to have this incredible gauntlet to use the power of the six gems to defeat Thanos. Although in the movie, the gauntlet fits any hand, this replica of the iron man gauntlet is not made by Tony Stark. However, it has a standard size, which I’m more than sure will fit you like a glove. Complete your cosplay with the last gauntlet we could see in the last movie Avengers Endgame.

Is it the gauntlet of Iron Man?

The truth is that this gauntlet does not have an owner as such. Unlike the gauntlet of infinity that we only saw in Thanos, this one was worn by two of our Avengers. In a first attempt by the Hulk to win the war and a second time by its creator, Iron Man. So we can say that it is the gauntlet of Iron Man in his honor.

What is different about this gauntlet from Thanos’?

The first and most visual thing is its color. Since its creator was Iron Man and we already know his obsession with red, this was the color it was made in. The new Iron Man gauntlet in Endgame is adapted to its owner and has a similar functionality to Tony Stark’s suits. Iron Man can call the gauntlet to be incorporated into his body to prevent someone else from wearing it. Regarding the power they have as an artifact, as far as we could see in the movies it is the same. What the gauntlet allows in both cases is to channel the strength of the gems to use their great power. It can be said that the version we have seen in Endgame is a more modern and practical gauntlet to prevent them from taking it away from you as it was about to happen in Infinity War with Thanos’ gauntlet. Another aspect that sets them apart is their creation. In this case we have Tony Stark with his great intelligence and knowledge of the technology that managed to create this powerful artifact. In the case of the gauntlet of infinity Thanos went to a planet known for creating legendary weapons so that it could be forged by one of the best blacksmiths in the universe.

How was Tony Strak able to create the gauntlet?

The truth is that creating a gauntlet is not an easy task, and after watching Endgame there were many doubts about how Tony was able to create a gauntlet that worked just like Thanos’. Let’s remember that the gauntlet of infinity was created by the best blacksmith in the whole universe and with very unique materials. But the most important thing is its shape, which allows you to channel the power of the gems. Luckily, Tony had already seen it and knew what shape it had to be in order to work properly. Besides, Tony had for a while the soul gem to analyze in the Ultron era, before it became Vision.

We see that the gauntlet is created with the latest technology of his suits, nano particles that allow to modify the size of the glove according to its wearer. The Iron Man gauntlet was instrumental in the end of Endgame and although the manufacturing process of this one was not seen, we can deduce a lot about the glove by looking at Tony’s past. So it seems that it is not necessary that it is made of the same material to work and channel the power of the gems.

How to make the Iron Man gauntlet

The truth is that to create this incredible artifact requires a lot of knowledge of science, technology and weapons to recreate it perfectly. It is difficult to reach Tony Stark’s level, and it is not yet known if it could be created with today’s technology. I know it sounds sad not to be able to make your own gauntlet, but we have taken care of this problem. We would all like to wear the gauntlet of Iron Man and feel his strength. That’s why we made this replica so you don’t have to take care of anything. Get it and start enjoying his strength and the six gems of infinity.

Why buy the gauntlet of Infinity Endgame?

After seeing how complicated it can be to create it yourself, you may be wondering if you want the Endgame gauntlet. If you want to feel the true power of the infinity gems, you definitely have to have your own gauntlet of infinity, and what better than the latest version of Endgame. The last piece that Tony Stark has left us to enjoy his great ingenuity and technology, is one of the most sought after items for fans. Having the gauntlet of Infinity Endgame may not give you super powers, but you can disguise yourself as the savior of the Universe. Although if you don’t want to, you can always have it as decoration to complete your collection. It looks great anywhere, and always comes with the six gems of infinity. 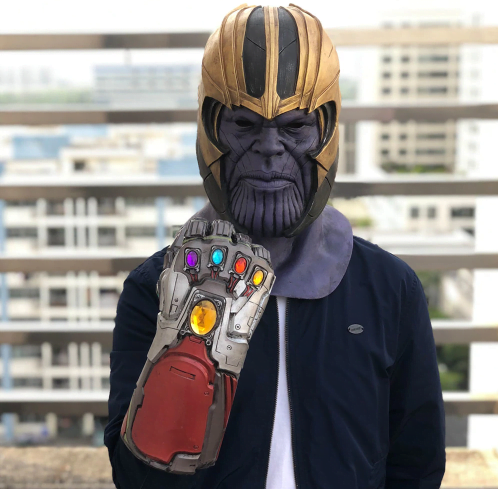 Tips for Gauntelete from Infinite Endgame:

Will my gauntlet fit?

Most likely yes, we work with standard measures so that it can fit all our customers.

Yes, there is no problem in washing it, it is recommended. It will not discolor or lose any of the gems.

Sure, it’s perfect for it. If you want to disguise yourself as the most dangerous villain in the universe, you can’t miss his gauntlet to complete your cosplay.

Can you lose the gems?

No, the gems are part of the gauntlet and as such it is impossible for them to come off or get lost.

The shipping time is approximately 14 days, depending on the period it can be more or less days. The shipments come with a tracking number to know where your order is and you can always contact us if you need information about your order. For Latin American countries please consult the FAQS for more information.

Yes, the payment methods we have available are Paypal or credit card. If you are from a country that does not use the Euro, don’t worry. The currency exchange is done automatically when you make the payment, you will pay with your currency the equivalent price. Guantelete del infinito Endgame buy with another currency, at the same price. 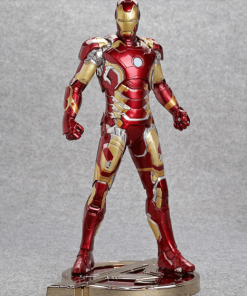 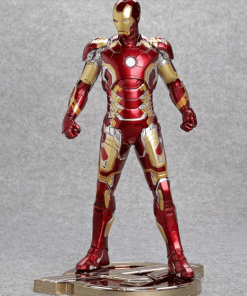 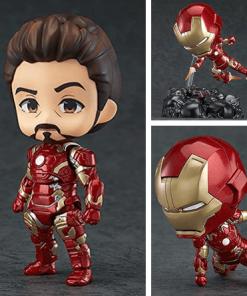 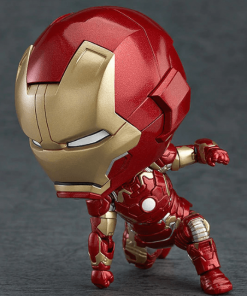 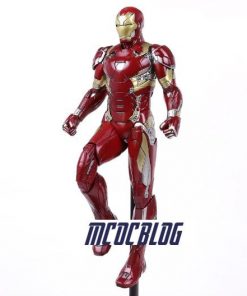 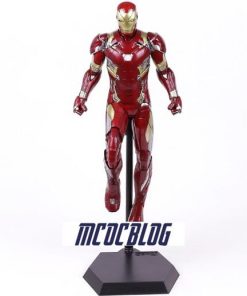 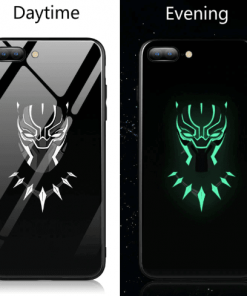 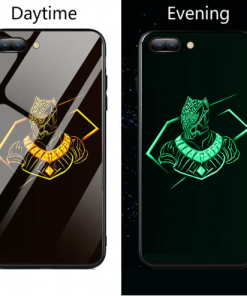 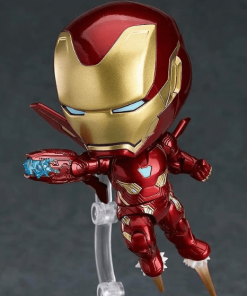 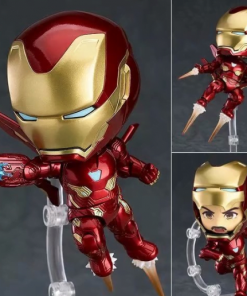 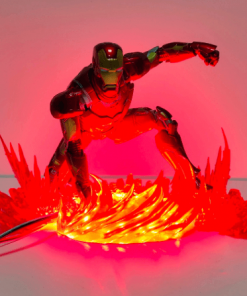 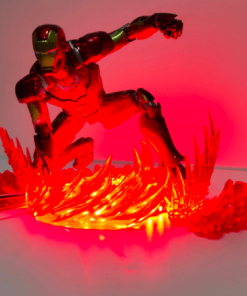 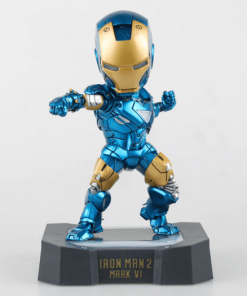 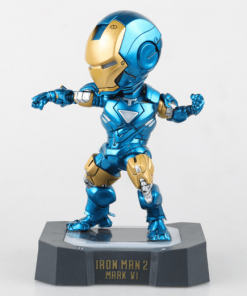 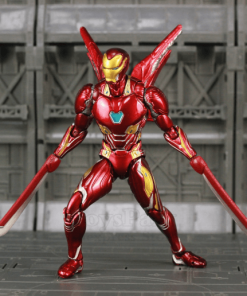 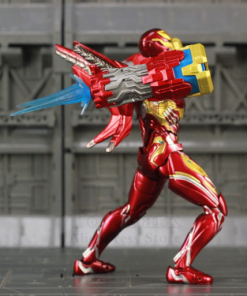